Ray Lynch was awarded the Staufer Medal by the  State of Baden-Wuerttemberg. 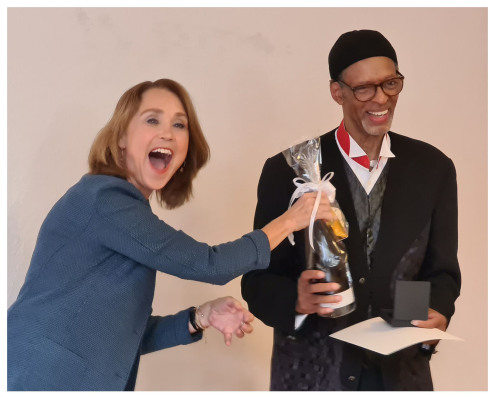 Dancer, Choregraph and Instructor Ray Lynch was awarded the Staufer Medal from the State Secretary for the Arts. Petra Olschowski presented the award on Sunday, September 19th, 2021 on behalf of the Prime Minister Winfried Kretschmann.

Ray Lynch helped to shape generations of young people. "He is a great entertainer and an extraordinary talent in this field, who manages to inspire and move people in many facets of contemporary dance", said Petra Olschowski. "With the New York CIty Dance School he has influenced generations. With him American Tap Dance and Jazz Dance came to Stuttgart."

The Staufer Medal is awarded by the Minister President and recognizes

services to the common good that go far beyond professional activities.

to honor his extraordinary commitment. He succeeds in ispiring people - especially young people - for the dance movement and passing on his passion. It makes an important contribution to anchoring dance as a living cultural form in society," says Petra Olschowski.

At the age of four, he received his first dance lessons at his uncle`s dance school and performed many shows with his sister.

At the age of eight, he began extensive dance training, which included tap dancing, jazz dancing, interpretive dancing and ballroom dancing. He attended the Fred Astaire Ballroom School, among others, and did his own presentation at the Brooklyn Academy of Musics and New York`s Carnegie Hall.

the US Army Recreation Clubs. He toured Europe with the group Bamboos

Of Jamaica in the late 1960s and early 1970s before opening the New York Dance School in Stuttgart in 1975. Here he taught American and Latin American dances and later added Tap Dancing to his program.

One of his first highlights was his Performance of the Tap Dance Concerto in 1992 together with the Hagen Symphony Orchestra.

In 1998 he was inducted in the Guinness Book Of Records. Ray Lynch attracted media attention with the first Tap-O-Mania event in Stuttgart (Germany) which surpassed even a similar event in New York with 6.951 people tapping simultaneously. It was recognized on television and entered

in the Guinness Book Of Records. Till this day the record still stands.

In 2006, Ray`s life as a dance instructor, choreographer and entertainer was filmed and titled Ray´S Tap Back and was repeatedly aired on various channels.

Ray Lynch was appointed in 2005 as artistic director of the project A Musical For Youth. This organizatioin is a part of the youth welfare office in Stuttgart. The initiated project develops approximately 60-80 children and young people, who live in stationary facilities under the care of the city. Every two yeras a musical was presented with two performances in Stuttgart.

A big thank you on Ray Lynch for his representation of American Dance in our german community.

Ray is now 78 years old. When he was asked "When will you stop dancing?" his answer was 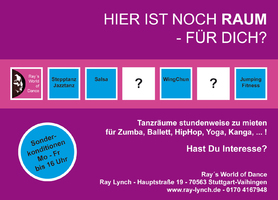 You want to see more?